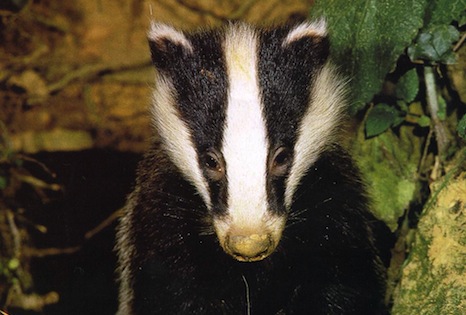 LONDON––Though culling predators has come to be recognized as one of the larger ecological mistakes of the Romans,  the Normans,  the Georgians in the 18th century,  and 20th century British governments, British environment secretary Owen Paterson on February 27,  2013 announced that badgers will be culled this summer in Gloucestershire and Somerset.

“A third area in Dorset is also being prepared for a possible cull,”  reported Fiona Harvey of The Guardian.  “Farmers conducting the cull will have to agree to kill at least 70% of the badger population in the affected areas.”

Paterson ordered the culling ostensibly to control bovine tuberculosis,  against the advice of almost every scientist who has studied the alleged role of badgers as a reservoir for bovine TB,   including Lord John Krebs,  the biologist who led nine years of experimental culling,  1997-2006.

“All the evidence shows that the answer to the problem of bovine TB in cattle does not lie in a cull that will be ineffective,  wasteful and potentially damaging to the welfare of both farm and wild animals,” summarized Royal SPCA chief executive Gavin Grant.

Originally scheduled for September and October 2012,  the Gloucestershire and Somerset culls were postponed at the last minute after the House of Commons passed a non-binding resolution against culling badgers by a vote of 147-28 and the Badger Trust filed notice of intent to sue Natural England,  the government agency licensing the cull participants.

Charged Naturewatch campaigns manager Carolyn Barker,  “The government is bowing to the National Farmers Union,  which is a major funder of the [governing] Conservative Party.  The Department of the Environment,  Food,  and Rural Affairs is simply using badgers as a convenient scapegoat,  rather than implementing the fundamental changes to cattle farming that are necessary to get bovine TB under control.

“In the 1970s,”  Barker recalled,  “bovine TB was almost eliminated through regular testing of cattle, slaughtering infected animals,  and placing their herds under quarantine until further testing results were clear.   Eleven years of localized badger culling failed to reduce bovine TB any further.  In the mid-1980s the annual testing of cattle ended,  and during the bovine spongiform encephalopathy and foot-and-mouth crises [1996-2001] no testing was done.  Many farms lost entire herds and afterward regulations were relaxed as farms restocked.  Cattle were bought and sold and moved all over the country.  These relaxations of the movement and testing regimes,  not badgers,  are to blame,”  Barker said,  for bovine TB resurging.

As a first priority,  Barker recommended,  DEFRA should “Develop fully functional vaccines for both badgers and cattle.  Incredibly,”  Barker remembered,   “just two months after coming into office,  [former environment secretary] Caroline Spelman [Paterson’s predecessor] cancelled five out of the six badger vaccination trials started by the [preceding] Labour government,  making clear that DEFRA had already made up its mind to cull.”

Paterson announced the resumption of badger culling 40 days after Science Daily published findings from a September 2011 survey of Welsh farmers directed by Bangor University researcher Paul Cross, which found that about one in ten had killed a badger in the previous 12 months.  This included 14.5% of cattle farmers,  and 6.7% of sheep farmers,  even though bovine TB does not infect sheep.  The participation of sheep farmers in killing badgers “may suggest a background level of badger-killing for sport,”  Cross suggested.

In Ireland,  meanwhile,  the Department of Agriculture,  Food & the Marine on January 18,  2013 rejected an appeal from the Irish Wildlife Trust for a suspension of culling badgers during the months when females are nursing young.

Chiefly insectivores,  European badgers also eat rabbits,  rodents,  shrews,  moles,  and hedgehogs––many of them also considered problematic by farmers––and seasonal fruits,  grains,  and windfallen nuts. European badgers have historically been persecuted as alleged henhouse raiders.  Badger-baiting with dogs,  popular in Britain and Ireland in the Middle Ages,  has been banned in Britain since 1835.  The original anti-baiting law was reinforced in 1911,  and again by the Protection of Badgers Act 1992.   In addition,  Northern Ireland passed separate legislation protecting badgers in 1973.  Yet illegal badger-baiting continues to surface.

As debate over culling badgers reheated,  University of Galway researcher Emma Sheehy published evidence of the ecologically destructive effects of decades of British and Irish policies that allowed pine marten to be trapped to the verge of extirpation.  Like badgers,  pine marten were persecuted as alleged hen house raiders.

After pine marten disappeared from much of Britain and Ireland in the mid-20th century,  coinciding with the rise of the prices paid for their pelts,  grey squirrels proliferated,  and red squirrels followed pine marten into scarcity.

Native to North America,  grey squirrels were introduced to Cheshire in 1876.  Soon grey squirrels spread throughout Britain and Ireland.  As in much of the U.S.,  grey squirrels and indigenous European red squirrels at first appeared to co-exist,  but after about 50 years the balance visibly tipped.

“Although greys do not attack reds,  the red squirrel population declined as the greys increased,” recounted Conal Urquhart of The Guardian.  “Greys are bigger,  stronger,  more adaptable,  and have more offspring than reds,  but most importantly they carry squirrel pox,  which does not harm them,  but can kill a red squirrel in days.”

Added Jenny Fyall,   environment correspondent for The Scotsman,  “Between 1932 and 1957, except during the Second World War years,  the Ministry of Agriculture paid a bounty for every grey squirrel tail brought to a police station,  but this was abandoned as ineffective.  The grey squirrel population range even expanded during the scheme.  Greys now outnumber reds by about three million to 130,000.”

Though the bounty system failed,  killing grey squirrels in the name of protecting red squirrels and native tree species continues to be vigorously promoted by the British and Irish agriculture ministries,  and by nonprofit organizations including the European Squirrel Initiative,  Songbird Survival,  the Royal Forestry Society,  the Countryside Landowners Association,  the Forest & Timber Association,  and about 2,000 British and Irish gun clubs.

Sheehy in 2009-2012 studied squirrels and pine martens in the Irish midlands.  Though pine martens have been protected in Ireland since 1976,  they did not recover until after trapped fur prices fell in the 1990s.

Wrote Urquhart,  “Sheehy gathered hair samples of martens to find DNA and analysed their feces to establish diet.  She found that there were three to four pine martens per square kilometer in the woods, which was enough to force out almost all of the grey squirrels.  Sheehy added it was clear from analysis of pine marten faeces that they ate a lot of grey squirrel,  but that alone could not account for the population crash.”

Sheehy theorized that “The presence of predators can disrupt the grey squirrel’s feeding,  breeding, and sense of security,”  Urquhart summarized,  noting that “Pine martens rarely eat red squirrels. Scientists believe that the red is more agile than the grey and rarely feeds on the ground,  so is less exposed to danger.”

Recoveries of red squirrels and declines in grey squirrels after pine marten become re-established have also been observed in several parts of Scotland,  but have not yet been scientifically quantified.  As of 2002,  Scotland was believed to have about 6,500 adult pine marten;  England about 1,600;  and Wales about 760.

But the numbers are mainly guesswork.  Though pine martens were protected in the United Kingdom by the Wildlife and Countryside Act 1981,  a roadkilled carcass found in 2012 was the first actual tangible evidence of their presence since another carcass was found in 1971.

The Moredun Research Institute in Penicuik,  Midlothian,  Scotland,  is trying to develop a vaccine against squirrel pox that could be administered to red squirrels in baited doses.  The project is funded by the Wildlife Ark Trust.

“It will be about two more years before the vaccine is developed,”  Fyall of The Scotsman reported in March 2010,  “and three years of trials after that before it can be used in the wild.

Meanwhile,  evidence has developed that squirrel pox may not actually be the major disease threat to red squirrels.  In July 2010 Vic Simpson and colleagues at the Cornwall-based Wildlife Veterinary Investigation Centre pointed out in the Veterinary Record that there are no grey squirrels on the Isle of Wight,  yet lesions similar to those produced by squirrel pox were found on the remains of nine red squirrels there and two on the Isle of Jersey,  also believed to have no red squirrels.  Simpson et al found that the cause of the lesions and the squirrels’ fatal illnesses appeared to be an infection transmitted by the bacteria staphylococcus aureus ST49,  endemic to the human nose and skin.

Illnesses transmitted by staphylococcus aureus ST49 “can run from the harmless to life-threatening, including food-poisoning,  pneumonia,  and toxic shock,”  summarized James Meikle of The Guardian. “Types resistant to some common antibiotics are a prime cause of infections caught in hospitals.”

Simpson et al hypothesized that humans may be infecting squirrels by handling food either given directly to squirrels,  or scavenged by squirrels from bird feeders.

The Simpson paper appeared two months after longtime animal advocate Angus MacMillan of Balloch, Dunbartonshire,  suggested in a letter to the Glasgow Herald that grey squirrels may have been wrongly blamed all along for the demise of red squirrels.

“The route of transmission of squirrel pox virus is unknown,”  MacMillan wrote.  “What is known is that infected lesions or crusts may remain infected for a long time,  allowing the spread of the disease throughout the forest by almost any creature who comes into contact with it,  including humans and their dogs.  Indeed, Scottish Natural Heritage admits that it does not know the route of transmission [of squirrel pox] and that possibilities include being passed by ectoparasites,  fleas,  lice,  ticks and mites,  which may transfer from animal to animal.  It also acknowledges that the virus may in fact be airborne.”

Deer are the British wildlife most recently nominated for intensified culling––because of the success of culls that exterminated bears and lynx in the present United Kingdom before 1,000 CE,  and killed the last wolves circa 1750.

University of East Anglia ecologist Paul Dolman in the March 7,  2013 edition of the Journal of Wildlife Management argued that the present United Kingdom deer population should be reduced by half.

“Deer are implicated as the major cause of unfavorable conditions in woodland structure and regeneration,”  Dolman summarized to Anna-Marie Lever of BBC News.

“There is evidence that deer reduce the number of woodland birds.  In the absence of predators the only way to manage them is to shoot them,”  Dolman said.  “This would be an opportunity for the public to go into a local pub and eat venison,  knowing that they will eat a wild,  free-ranging animal who has been humanely killed.  I’ve been a vegetarian for 15 years,”  Dolman added,   “but for anyone to eat meat and complain of culling deer lacks consistency.”

Among the six deer species now inhabiting Britain,  red deer and roe deer are considered native. Fallow deer,  muntjac,  sika,  and Chinese were all introduced within the past 200 years.

In absence of native deer predators,  reported sightings of large exotic cats have increased since the passage of the Dangerous Wild Animals Act of 1976.  The act is believed to have prompted some illegal possessors of big cats to release them into the countryside,  possibly starting small feral populations of pumas or panthers.  The British Big Cats Society collects more than 2,000 reported big cat sightings per year.  Two unidentified big cats were reportedly photographed by a thermal imaging camera in 2009,   and a puma skull was discovered in July 2005 by a Devon farmer.