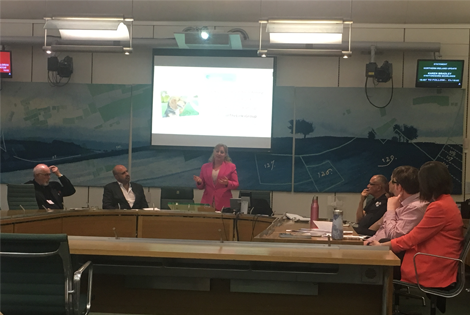 The All Party Parliamentary Dog Advisory Welfare Group (APDAWG )'Dog Fighting, Animal Cruelty & Links to Domestic Violence' meeting explored the link between crimes against animals to violence against humans bringing together a panel of experts, Members of Parliament and animal welfare campaigners. Co-Chair and vet Marc Abraham opened the meeting welcoming attendees not least actor and campaigner Peter Egan. Peter set the important tone of the meeting speaking to share his harrowing experiences of visiting US puppy farms (we’re hopeful for a Victoria’s Law in the USA replicating Lucy’s Law in the UK) and very recently witnessing the terrible suffering of dogs waiting to be slaughtered in Indonesian meat markets.  A full report of Peter’s visit to Indonesia and the dogs that he rescued is covered in K9 magazine. In closing his comments, Peter said, “Being vegan takes the cruelty out of life”.

The second speaker, Edie Bowles, Solicitor, Co-founder of Advocates for Animals, was given the task of defining cruelty - a difficult one with no legal definition although often interchanged with ‘unnecessary suffering’. As an animal protection law firm, Advocates for Animals are helping a range of campaigning organisations with legal tools such as Freedom of Information, undercover investigations and judicial review. 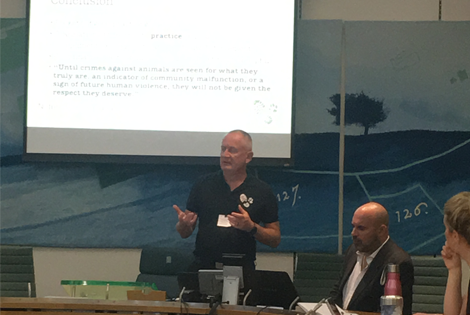 Naturewatch Foundation’s and CEO of Hidden-in-Sight, Mark Randell was next, sharing outcomes of our work in Ukraine and his experiences campaigning against animal cruelty. Mark spoke of how there has sometimes been a disconnect between law enforcement and animal campaigners and how important it is to tackle the causes of animal cruelty. Mark gave some examples of how some convicted animal abusers have been linked to other serious crimes including child abuse, domestic violence, murder, drugs and firearms. Using examples from our training work in Ukraine, Mark covered working with law enforcement and turning theory into practice to prosecute criminals and prevent cruelty… and that it’s working! Last year, for the first time ever, someone was charged under Ukraine’s Animal Protection law, receiving a 7-year sentence! Please visit the campaign section of our website to read more of our ground-breaking work in Ukraine. With the UK’s first dog-fighting pit (held 200 year ago) located just a few hundred meters away from the House of Commons meeting venue, Mark’s second presentation, about dog fighting, gave details of the scale of the problem with around one million dogs used for fighting, an activity linked closely with drugs, firearms, betting, and a lot of cash. Prevalent in closed communities, some dog fights last four hours, with the dogs suffering horribly fighting to the death. Shockingly, the maximum prison sentence is still six months and this needs to change.

Battersea Dogs & Cats Home’s, Mike Webb, updated attendees on the campaign to increase animal cruelty sentences to five years from six months in the UK.  With support from all political parties, the UK government has said they support the proposal and are waiting for the right opportunity to change the law – apparently a top priority after Brexit. The Scottish Parliament is currently consulting to change the maximum sentence to five years. With two people every day convicted of animal offences in the UK, this change in the law cannot be too soon.

Tracey Berridge, Founder/CEO, Dogs Helping Kids (DHK) spoke passionately about how dogs can enhance and help children’s lives. Tracey shared the harrowing research she undertook in founding DHK including startling percentages of children not realising they were being cruel to their pets. Dogs Helping Kids is a unique charity dedicated to using highly trained dogs to help teach children non-violence, empathy, respect, kindness, love, responsibility, friendship and trust. They are the only organisation in the country training and assessing dogs purely to work in the school and college environments as both educational and therapeutic aids. More information is available here.

Vicki Betton of the PDSA was the final event speaker, providing detail of ‘The Links Group’ supporting vet teams in tackling animal abuse. Vicki spoke of the significant overlap between domestic violence and animal abuse with 20% of children exposed to domestic abuse.  In providing training to vets, the group ‘links’ all professionals in the hope that agencies will work together to help prevent related cases and ‘non-accidental injuries’ from going undetected. With some abusers using a pet as a weapon to exert control, human victims are also trapped afraid for their pet’s safety. More information here.

On a very busy day in Parliament, Kerry McCarthy MP and Dr Lisa Cameron MP attended the meeting to take the message back to Government that the ‘link’ must be dealt with and for government action on animal welfare. Dr Cameron closed the meeting, very pleased that Peter Egan has become a Patron of the Group, and reflecting on the success of the group so far such as Lucy’s Law and with a final plea from Marc Abraham for anyone to help in any animal welfare campaign they can.