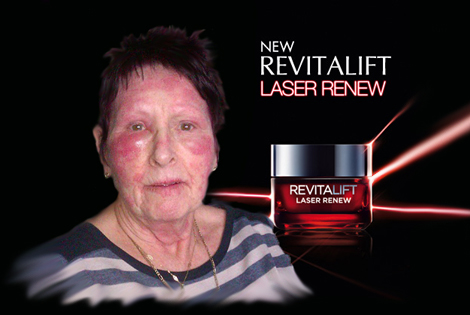 A 66 year old woman was left with horrific blisters and a swollen face after using L'Oréal Paris Revitalift Laser Renew anti-ageing cream.  This poor woman fell victim, as thousands of animals do, to L’Oréal’s antics simply to make even more money.

Marlene Corrall suffered a severe allergic reaction after using L'Oréal Paris Revitalift Laser Renew anti-ageing products on her face.  A result that many people don’t bat an eyelid about when it happens to animals.

Marlene stated: “Within two days of using the creams, my face started to swell and break out in painful red blisters which spread all over my face.”

She unfortunately suffered severe blistering, rashes and lumps on her face.  Marlene spent £130 to see a private doctor who established her reaction was due to a chemical in the L'Oréal anti-wrinkle creams called methylisothiazolinone, also known as MI and is used to increase the shelf life of cosmetics and household products including moist tissue wipes, shower gels, deodorants and wall paint.

The cost was a lot more dearer than just money as it took Marlene Corrall’s skin 6 months to heal with the help of perscribed steroids, and it still hasn’t returned to its former condition.

Marlene Corrall said; “I am now very careful with products that I use to make sure the ingredients are only natural minerals.”

Marlene Corrall is not the only one who’s suffered for the sake lengthening the shelf life of products for a few more months.  So did Vicky Hall who suffered extreme reactions to Piz Buin and two other products.  Sophie Holmes was rushed into hospital whilst skiing in the Alps when her reaction to MI took hold, which was hidden in her sun cream.  She suffered severe blistering, itchy eyes and swelling.

If only more people would realise the length these ruthless companies will go to in order to make money. L'Oréal are notorious for their animal testing and are a multi-billion pound company owning many subsidiaries such as Body Shop, Lancôme and Urban Decay.

This means even if you buy organic and natural, the money you spend to make yourself feel good could still be inflicting pain upon helpless animals.

Body Shop have a Fixed Cut-Off Date animal testing policy, but due to L'Oréal being their parent company they hand over millions in dividends to them every year. These dividends, your money, is doing to animals what happened to these woman.

Animals cannot ask for help, they cannot sue companies, they cannot claim compensation and move on with their lives.  The ingredient these woman are allergic to, MI, is a notorious chemical not only found in cosmetics but also in a lot of household products.

Doctors recommend that companies use no more than 15ppm (parts per million) as any more than this can cause severe reactions, including nerve damage and can develop into eczema or dermatitis.

“We are in the midst of an outbreak of allergy to a preservative which we have not seen before in terms of scale in our lifetime.  Many of our patients have suffered acute dermatitis with redness and swelling of the face.  I would ask the cosmetics industry not to wait for legislation but to get on and address the problem before the situation gets worse.”

Animal testing for cosmetic purposes is now banned in the EU, which means all new products released after 11th March 2013 can no longer include new ingredients that have been developed using animals anywhere in the world

Also a list of ingredients has to be displayed on every product, so we can identify which cosmetic products contain MI.  We found moisturisers, anti-wrinkle cream, shampoo’s, sun creams and even baby wipes contain this chemical.

However, because animal testing for household products is still legal, by law these companies are not required to release the ingredient list for their products.  This means you could be exposed to MI and not even know.  One in every ten adults are allergic to this chemical compound as well as one in five children who are more prone due to their sensitive skin and immune system.  Even though the tests on animals have been dyer with more than half the laboratory rats dying of nerve damage, the results are still ignored and this dangerous chemical continues to be produced and sold as a ‘safe’ ingredient.

So why bother to test on animals if the companies ignore the results anyway?