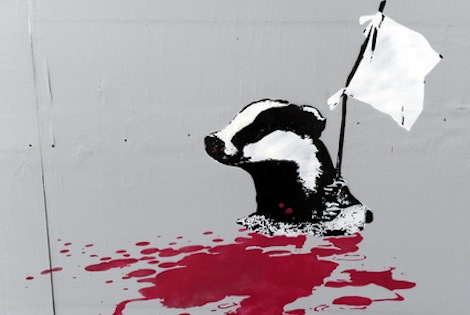 Protesting against the badger cull

As the trial cull of badgers could start in west Gloucestershire at any moment, tensions are high between animal rights groups and farmers, and this piece of art appears to be trying to capture the mood.

The city’s own Banksy-style artist Beastie has decorated the hoardings around the former Gloscat building in Brunswick Road with a bloodied badger’s head, accompanied by a white flag of surrender.

Trial culls have been licensed to see if they have an effect on the spread of TB in cattle but the move has provoked outrage from pro-badger groups.

The artist, known simply as “Beastie” has left his or her mark on Gloucester.

A deer has been depicted nearby on hoardings, nibbling on shrubs growing next to it. Leopards, tea drinking chimps and an armchair have also materialised in the city centre.

Marksmen have been granted a licence to shoot badgers in the west Gloucestershire cull zone over a six-week period as part of a pilot to prevent the spread of bovine TB in cattle.

The six-week period could begin at any time, as the licence period began on June 1.

Farmers have been pressing for action for years, but the killing of badgers is bitterly opposed by Naturewatch.