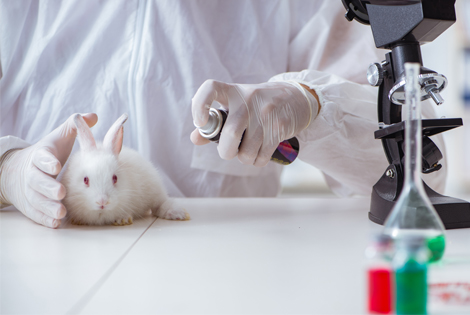 Shocking news from the Home Office

Little is known about what life is actually like for each of those animals in a laboratory due to the secrecy surrounding the controversial testing.

Back in July 2017, Naturewatch Foundation responded to the initial report ‘Statistics of scientific procedures on living animals, Great Britain 2017’ and the horrifying figures which disclosed 3.72 million live animals were used for scientific purposes. This number included 2496 dogs, 71 cats, 288 equines, 2215 primates, the vast majority being highly sensitive mice, zebrafish and rats. The figures ‘used in science’ have now risen by a further 1.8 million animals.

Naturewatch Foundation continues to call on the government to urgently begin the process of repealing section 24 of the Animals (Scientific Procedures) Act so the British public can finally be truly informed about animal experiments.  Section 24 – the so-called ‘Secrecy Clause’ - makes it an offence punishable by up to two years’ imprisonment to disclose certain details about the use of animals for scientific procedures, even if the researchers carrying out the procedures want it to be known.

“Back in 2014, the Home Office launched a consultation to repeal section 24 of the Animals (Scientific Procedures) Act but nothing has been done since the consultation, and no government response has been published. Government action is long overdue to eliminate animal testing, strengthen animal welfare law and encourage the acceptance of alternative methods of testing including increased investment in the sector.”

Join Naturewatch Foundation in calling on the Minister of State with responsibility for animal experiments to urgently begin the process of repealing section 24 of the Animals (Scientific Procedures) Act so the British public can finally be truly informed about animal experiments.