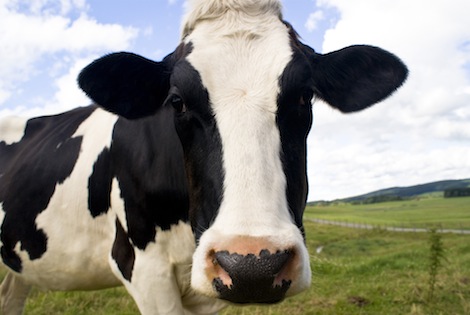 Just a few days ago it was revealed that a cow which had tested negative to TB for five years was found to be riddled with the disease when it was sent for slaughter!

The cow, one of Gelli Aur College’s dairy herd, was culled at the end of its productive life and, after it was slaughtered, it was found to be “riddled with TB”.  John Owen, Farm Manager at the Carmarthenshire college, said that the level of infection in the cow suggested she had been infected for years!  Mr Owen has expressed concern as the cow kept passing the test and there was nothing to suggest the cow was infected.  The cow could well have been spreading the disease to other animals within the herd and been at the root of successive test failures.

This is yet more proof of Defra’s incompetence!  With all the modern technology we have at our disposal, it’s disturbing that the skin test that forms an integral part of the Government’s strategy to control bovine TB is completely unreliable! The entire testing process needs to be reviewed urgently and more effective testing methods developed without delay.

One thing you can be sure of is that the incident in Carmarthenshire is only the tip of the iceberg!  The current skin test is effectively ‘covering up’ a huge hidden reservoir of bovine TB.

All reputable research has concluded that the only way to eradicate bovine TB is: vaccination; coupled with improved cattle-based measures such as stricter controls on the movement of cattle; improved cattle testing methods and more frequent testing, and; improved bio-security measures on farms to help prevent transmission of the disease.  Farmers must implement measures to minimize badgers interacting with cattle by keeping badgers out of farm buildings, feed stores and bedding, and take steps to limit the spread of TB between cattle, including double fencing on all boundaries to prevent spread to neighbouring farms.

It’s time for Defra to hold its hands up and admit that a great deal of the blame for the spread of bovine TB lies with today’s agricultural practices.  Instead of shifting blame onto badgers, Defra must start listening to science and get the farming industry to tidy up its own backyard!

Cattle Vaccination – Before a cattle vaccine can be deployed commercially, the government must secure change to EU regulations as, currently, European regulations and the protection of export markets  prohibit the use of TB vaccines in cattle.

Cattle Testing Methods - The current skin test is only about 80% accurate.  This results in “false positives” and also “false negatives” which means that the meat and milk from many animals infected with bTB do go into our food supplies!  Thankfully, it’s hard to get TB from eating meat, and the fact that all milk is pasteurised means that there is not much chance of getting the disease from milk.
BlogRecent posts
Help us to help them
‘My most asked questions as a Veterinary Nurse answered’
October 6 was National Badger Day
From animal abuse to shooting teachers
A code-cracking scavenger hunt marked our 30th anniversary…
Registered charity no 1039679
Get involved
Donate Take action Fundraise
Raise funds for Naturewatch
Fundraise Raise funds for free online Leave a legacy
Naturewatch eNewsletter sign up