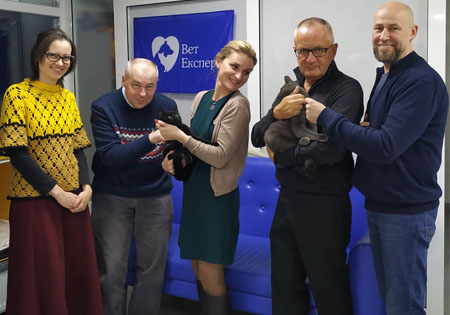 The value of animal welfare volunteers in Ukraine

On December 5, it was International Volunteers Day - a great chance to reflect on many of the groups that I’ve met and worked with across Ukraine.

Normally, with the police training project I spend time with the volunteers in each city too, explaining how they can more effectively work with law enforcement to ensure more abusers are brought to justice.

There are always frustrations that after all the hard work of the animal volunteers, a reported crime goes no further than a ‘filed’ police report. In Ukraine this is known as a ‘protocol’. I talk to the volunteers about animal crime scenes, and how they can preserve them until the police arrive, and how to brief and report the incident to the attending officers.

Most volunteers are at the front end of the abuse.

It is they who find or have to deal with the cruelty treated cat, or violently abused dog. They have to remain positive through all the horror that they witness, and I am incredibly humbled by their passion and commitment.

That’s why I often take time out when I am visiting Ukraine to get to the rescues, talk to as many volunteers as I can and meet many of the abused animals that have been rescued and waiting new homes.

Last December 5, I was in a very cold and snowy Cherkasy, a city understood to be a historic centre of the Cossack movement. The railroad had arrived in the city in the late 19th century and is the main connection to Kyiv. I had used the slow-moving but incredibly reliable and cheap (most tickets are just a few British Pounds) sleeper service to reach Cherkasy.

After a day with the patrol police officers, and another with the amazing volunteers, we were invited to the local cat rescue. How could we resist? We met volunteers and vets who give their time up for free. And, of course, we met the cats and heard all about how they have been rescued and what their future holds.

Because of the supporters of Naturewatch Foundation, their future is much brighter.

Whether it is supporting one of our petitions, writing to the Ukrainian Government to pass Law 2351 or making a small donation, I can see first-hand the impact that you all make nearly 2000 miles away from the Cheltenham Head Office, and I can’t thank you enough.

As with all animals, they matter, whether they are victims of abuse or rescued from temperatures that can regularly reach -10 celsius.

As 2021 nears, we must make sure that these animals, these communities, continue to have hope.

Find out what we're doing to help stop animal abuse in Ukraine.

Read how you can help.