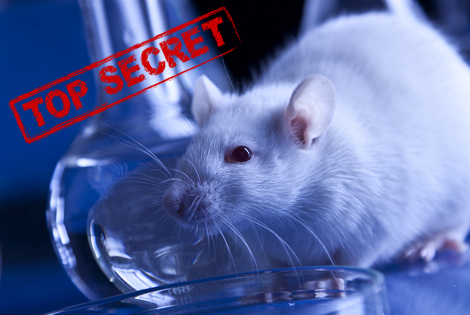 There are some things we know about the 4 million scientific procedures conducted on animals in the UK each year.  For example, we know that they are experimented on for developing pharmaceutical products, medical research, for training and education, and for testing chemicals that go into household products. We know that mice are the most used species in experiments in the UK. We know that of the 3,405 dogs experimented on in 2015, 3085 of them were beagles.

But what about how the animals are treated? What methods were used to experiment on them? How were they housed, were they fed a suitable diet, were they given appropriate enrichment, before being euthanised or dying from the procedure inflicted on them?

Has the research being carried out been done before? Is testing on more animals actually necessary?

You’re not allowed to know the answers to any of these questions.

Because of section 24 of the Animals (Scientific Procedures) Act 1986, it is a criminal offence to disclose certain information about animals experiments in the UK.  This information includes, but is not limited to, information detailing methods for:

Denying public access to this information is arguably an infringement of your right to freedom of information. It also limits the ability of researchers, medical charities, and animal welfare experts, to assess the value of research projects before they are carried out.

Here are a few examples of questions that were denied answers under section 24.

Question: A request for information about Botox testing on animals was put to the Home Office.

The enquirer asked how many project licences for Botox testing on animals were issued, currently active, and declined, by the Home Office in 2012; which types of animal testing methods were used for testing Botox; and how many animals were used to test Botox.

Answer: YOU’RE NOT ALLOWED TO KNOW how many animals suffer for Botox testing, or what methods were used to test on them.

Question: A request for information relating to the use of animals in research by Animal Health & Veterinary Laboratories Agency (AHVLA) was put to the agency.

The enquirer asked how many animals were bred and used for research purposes at AHVLA in 2011. They also asked for copies of communications relating to Ethical Review Committee meetings.

Answer: YOU’RE NOT ALLOWED TO KNOW how many animals were used or bred for research purposes by AHVLA (or any other organisation) and you’re not allowed to know the ethical justifications for testing on animals that were made by the committee approving the research.

The Agency is sponsored by DEFRA and the Welsh and Scottish governments. Research conducted there is funded by tax-payers, so this information is in the public interest. Communications relating the ERC meetings could provide clarity as to why animal research was conducted, however even if APHA or their ERC members wanted to release this information, doing so would be a criminal offence.

Question: A request for information was made to the Defence Science and Technology Laboratory regarding the use of animals at Porton Down, who have been under scrutiny for their use of animals for military research.

The enquirer asked how many animals were bred and used for research at Porton Down in 2011; and for copies of communications relating to Ethical Review Committee meetings.

Answer: YOU’RE NOT ALLOWED TO KNOW the ethical justifications for testing on animals that were made by the committee approving the research at Porton Down.

However, DSTL did disclose how many animals were used in that year, unlike the AHVLA who rejected the same request under section 24. Does this mean DSTL committed a criminal offence? More likely it implies there is a level of discretion in interpreting the Act to suit the public authority. And section 24 is a clause the Home Office don’t seem too interested in enforcing unless it’s to prevent information being disclosed.

So long as animal experiments continue to operate behind a veil of secrecy we will never be able to prevent unnecessary waste of animal life, medical charity research funds may be misused, and research advancements delayed.

Then, please contact Amber Rudd, Home Secretary, and your MP, to make sure they read it.