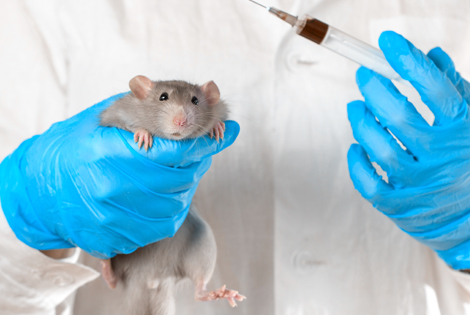 In 2019, 3.4 million procedures were carried out in Great Britain involving living animals, according to UK Government statistics published today, 16 July, 2020.

Animal welfare charity Naturewatch Foundation is hugely disappointed by a miserly 3% decrease in the number of animals imprisoned and tortured in UK labs during the past year.

In response, the charity is urging UK Government to dramatically speed up the process to replace outdated animal experiments with cutting edge, human focused research.

The majority (93%) of procedures (both for experimental and breeding purposes) used mice, fish, or rats. However, 18,000 specially protected species including cats, dogs, horses and primates were used. Of this 2,200 were non-human primates such as marmosets, tamarins, crab-eating macaques and rhesus monkeys.

Whilst procedures are no longer carried out for cosmetics in the UK, animal testing is still used for the safety testing of some substances.

These tests including 67 animal experimental procedures for ingredients contained in household products. A significant proportion of laboratory animals are used in testing medicinal products for humans, to fight infections, cancer, nervous and mental disorders. However, in light of Covid-19 and the delays caused by rounds of often unreliable animal testing, scientists across the world have called upon governments to support investment in human-focused science. Modern technologies, such as organ-on-a-chip and advanced computer-modelling techniques, remove the need to test infections, chemicals and medicines on animals. In theory, this approach could be much cheaper and faster and not involve torturing animals.

Caroline Ruane, Chief Executive for Naturewatch Foundation, said, “The tiny 3% decrease in the number of animals used for all experiments is extremely disappointing. The UK is a nation of animal lovers. It is awful to think of the suffering of more than 3 million animals imprisoned for human benefit in UK laboratories. I urgently call on the Government to shift  its efforts and scientific investment away from the use of animals and instead focus on supporting modern human-focused research, which is so widely supported by scientists and animal welfare campaigners.”

Read more about animal experiments in the UK.

Find out how you can help.