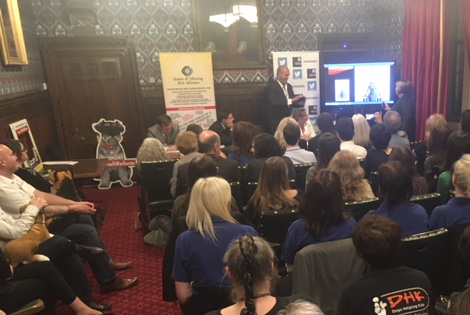 Why are so many dogs being stolen?

Dog theft is on the increase in the UK. Many of us will know of someone who has been a victim of this heartless crime, which inflicts terrible stress and heartache on all family members. It is maintained that dog theft is mostly fueled by profit-making, illegal puppy farming and the demand for designer dogs. People’s gardens are the number one location from which unattended dogs are stolen[1].

We all know that losing a dog is not like losing a mobile phone but unfortunately, under the law that is how it is still defined. It’s no surprise that more than 100,000 people have signed Dr Daniel Allen’s petition calling for changes to the law around pet theft.

The February meeting of the All Party Dog Advisory Welfare Group (APDAWG) in the UK Parliament, ably chaired by vet Marc Abraham and Dr Lisa Cameron MP, got to grips with the issue of pet theft. Naturewatch Foundation participated in the meeting, hearing impassioned speeches from speakers including Debbie Matthews, Founder of Vets Get Scanning, who told her harrowing story of how she was reunited with her two Yorkies, after they were stolen from her car in a supermarket car park. Much debate followed over the incompatibility of 13 different micro chipping databases. Dr Daniel Allen, www.drdanielallen.co.uk of Keele University, assisted by two students, shared their academic research on dog theft, and spoke of their successful petition and all the campaigners who have worked tirelessly, such as SAMPA—the Stolen And Missing Pets Alliance—and Pet Theft Awareness.

Scottish MP Ross Thompson has taken on dog theft reform as a priority in his work in Westminster. Ross loves dogs and especially his Poppy…

“When I am asked what is the most difficult part of my job as an MP, I always answer, 'Monday mornings'. That is not because I have to roll out of my bed to catch a 7.15 am flight, but because every Monday morning it breaks my heart to leave my Jack Russell cross Yorkshire terrier, Poppy.”

Ross has secured a ‘Private Members Bill’ to bring in a law to amend the Animal Welfare Act 2006 and the Animal Health and Welfare (Scotland) Act 2006 to make the theft of pets an offence. He recognised that as it wasn’t government legislation it may not become law now, but that it was useful to ‘chip away’ and bring the issue to the government’s attention. He will continue to campaign on the issue.

It was great to hear from Jayne Hayes, founder of Dog Lost, which has helped reunite more than 85,000 lost dogs with their owners! Jayne, with her wonderful network of volunteers, spoke of how people can sign up to their website www.doglost.co.uk and get involved on social media @doglost.

Beverley Cuddy, editor of Dogs Today and Dogs Monthly, gave the final heart-warming presentation, not least sharing her love of dogs as stars of the silver screen!

Animal welfare is truly a cross-party issue in Westminster. It’s very rare that MPs of all political parties share a passion, but with more than 12 million people having a pet in the UK, it brings people together! For more information about APDAWG, go to www.apdawg.co.uk.

[1] Recent findings published by Direct Line Pet Insurance, using UK police statistics, show an upward trend in pet thefts in recent years, with a 14% rise in 2016 and a further 6.8% increase in 2017.