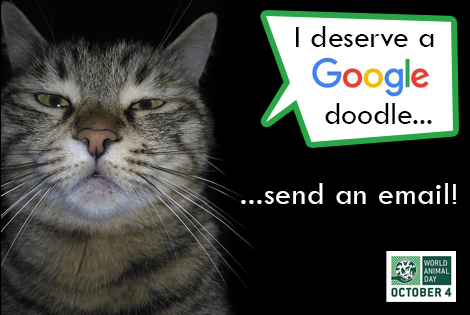 We think that thousands of people working together to improve the lives of animals on October 4 is something to celebrate!

World Animal Day isn't a charity - it's an opportunity for YOU to raise funds or awareness for any animal welfare issue that you feel strongly about, including...

Help us persuade the Google doodle team to create an amazing image for World Animal Day by supporting our campaign:

Some Google doodles are completed in a few hours, but others can take MONTHS to create, so please send your email TODAY!

Every day, 205 BILLION emails are sent around the world - make yours count!

Here are some points you could use in your email, in your own words...

The Google creative team receives hundreds of doodle requests every day. They might not respond directly to our emails, but wouldn't it be a fantastic surprise to wake up on October 4 and find a beautiful World Animal Day doodle on their home page?

Why not create your own event? Get Involved