Campaigns
Animal Testing in the UK Make a donation

Help us share every animal test subject’s story with a donation to our Animal Experiments in the UK campaign, and make sure their suffering is recognised. We need to reach everyone in Britain today. Thank you.

Animal Experiments in the UK

Animal testing is legally required for many products that we use in daily life. 3.3 million animals were used in animal experiments in Britain in 2019. That means for every minute that ticks by, seven animals die in British laboratories. Great Britain drugs, poisons, kills and autopsies more than 10,000 sentient creatures every day of the year.

Animals are still used to test the safety and effectiveness of products including household cleaning ingredients, medicines, vaccine development, industrial chemicals, foods and even some cosmetics. But what is life like for those animals in laboratories around the UK right now? The answer is: nobody knows for sure, because you’re not allowed to know.

The details of these experiments are hidden from the public using Section 24 of the Animals (Scientific Procedures) Act 1986 – the so-called 'Secrecy Clause' – which makes it an offence punishable by up to two years’ imprisonment to disclose certain details about the use of animals for scientific procedures, even if the researchers carrying out the procedures want it to be known. 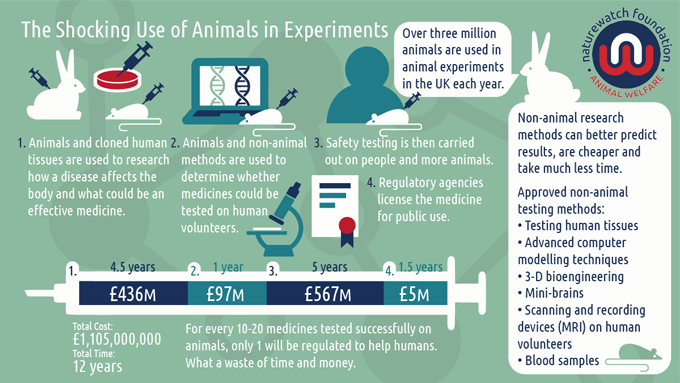 With your support, we will work with lawmakers and corporations to reduce the number of animals used for experimentation, and replace animal research with human-centric, effective, and safer methods. We will work towards improvements in openness and transparency in animal experiments, and call on consumers and companies to lead the way to the cruelty-free UK.

You can end animal testing every time you shop