We are proud to be working with Hidden-in-Sight to deliver professional training to Police Forces, Municipalities and animal protection NGOs across Ukraine on how to fight animal abuse.

Animal Abuse Links to Other Crime

A shocking example of this occurred recently in Ukraine. The perpetrator (pictured below) cut off a cat’s ear, testicles and tail, and then stabbed it to death.

It's because of cases like this that Ukrainian police forces are queuing up to receive our training, and why harsher sentences are suddenly being given for animal abuse.

In June we visited Chernivtsi after being invited by the police and animal groups. We took part in an excellent seminar, carried our media interviews and trained the police. Our visit inspired the police to visit the local rescue to help find forever homes for the animals and we also inspired the animal groups to build on the seminar and arrange a programme of police cooperation that has already led to one investigation under their Article 299 covering serious animal abuse. One comment we had was, “There are not enough words to describe all the benefits that the seminary brought !!! Your dedication is especially striking, and how interesting you spend it. Thank you very much!” 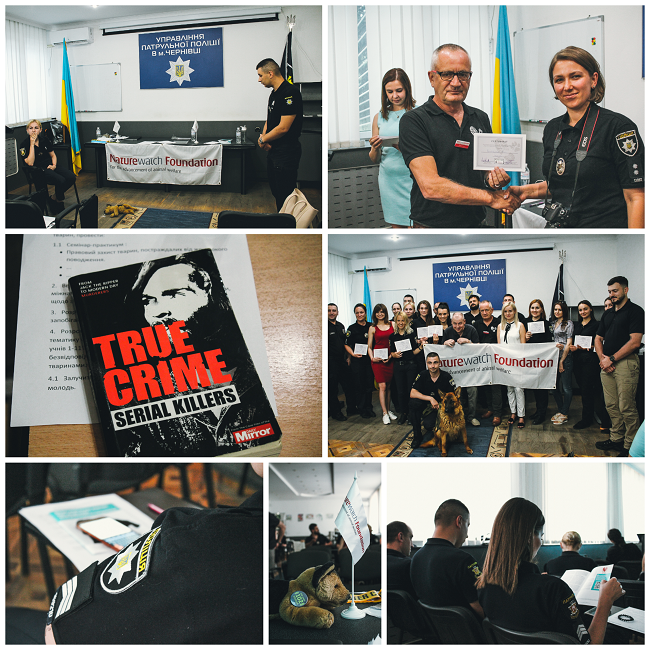 Empowering the groups to adapt how they work together in tackling animal abuse is an especially important aspect of our project.

Our Police Training Programme is based on at least 32 studies worldwide that evidence the link between animal abuse and human violence. Here are just a few shocking findings: