We are proud to be working with Hidden-in-Sight to deliver professional training to Police Forces, Municipalities and animal protection NGOs across Ukraine on how to fight animal abuse.

Collaborating for a better world

Our programmes across Ukraine are aimed at helping create safer communities for animals AND people.

Violence against animals and violence against people share a common pathway. Abusers use violence to control their victims, often hurting pets to inflict pain on the owner, perhaps in a domestic violence situation.

In one case a man in Ukraine killed his grandmother’s dog then threatened ‘she would be next’. The man in question was sent to prison, but it’s just one example of the kind of abuse we’re here to stop.

We’re using our knowledge and experience to help the police in Ukraine, to understand why it’s important to deal with animal cruelty professionally, and how to investigate it. 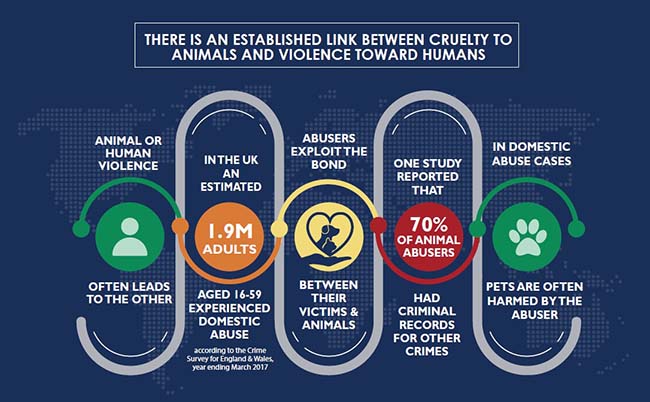 What the research tells us

Physical and sexual violence affects approximately one million women in Ukraine every year. Only about 10% of these victims report these crimes, yet 600 women each year are killed by domestic violence.

Internationally, more than 100 studies have been carried out to examine the link between animal and human abuse. One US-based study shows 71% of physically abused women report that their male partners also threatened or harmed pets. Victims often delay reporting violence to the police if a pet is involved, meaning they may well be abused again themselves.

The link between violence against animals and people is well established. Psychologists have been studying it since at least 1963, with hundreds of academic studies, along with TV shows and books that show how serial killers often start with animals.

We take this huge body of research and turn it into practical training for police officers. We show them that animal abuse rarely exists in a vacuum and how those who commit violent crimes against animals often move on to people.

Helping the police to treat animal crimes with the appropriate level of seriousness means they're better equipped to understand what they’re seeing, and better prepared to deal with it.

It also means confidence in the police is increasing, which can only be good news for both animal and human victims.

PLEASE MAKE A DONATION TODAY and join with us to make this pioneering project an even bigger success!

Ukraine is a vast country, around twice the size of the UK. It’s only your generosity that will enable us to reach police, animal groups and municipalities across all regions.

The more training courses we run, the more animal abusers will be brought before the courts. Ultimately, this means an increased number of animals will be saved from a life of abuse and suffering at the hands of criminals.