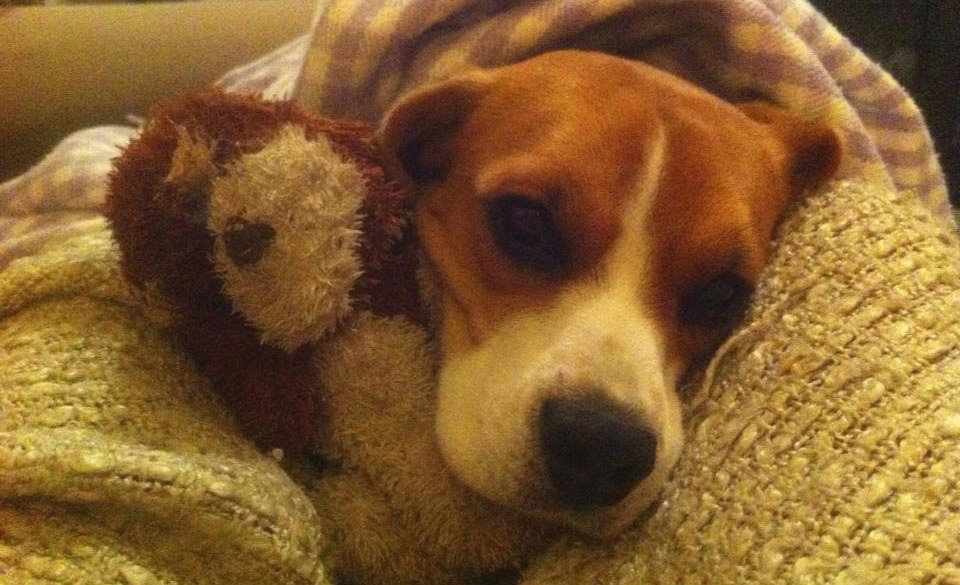 Dogs rescued from cruel puppy farms often need to be homed to a family with an existing dog to help them adjust to a life outside the breeding sheds.

The Hartley family had some experience with farmed puppies before they adopted Delilah, a beagle pup.

In 2011, our family decided that we were ready to open our home to another dog. 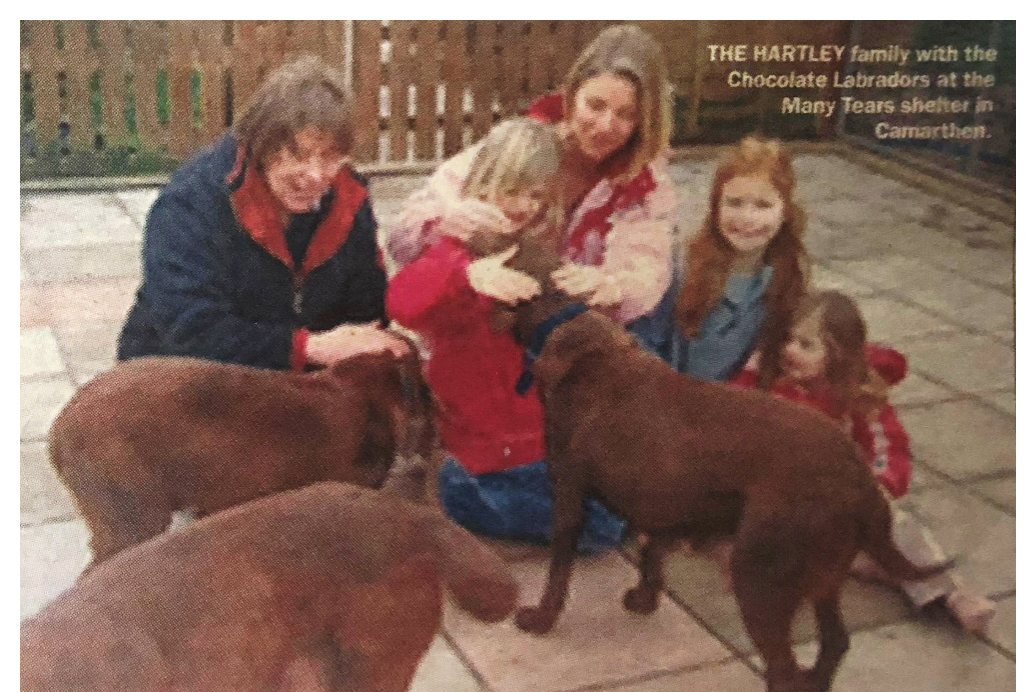 She turned out to be the most beautiful addition to our family - incredibly loyal, with kind, knowing eyes and a tendency to whizz around in huge circles when she was excited!

A newspaper article (right) featured our family and the ex-breeding Labradors who were dumped from the back of a lorry by their breeder, including Beau.

We knew that we wanted to open our hearts to another rescue and decided that we would go back to MTAR to look for a canine to add to our menagerie.

This is where we found Delilah, a tiny beagle puppy who had been abandoned by her breeder, along with her siblings and another beagle litter.

She was tiny! Her adoption photo had her sat next to a size six Croc shoe - she was about half the size! 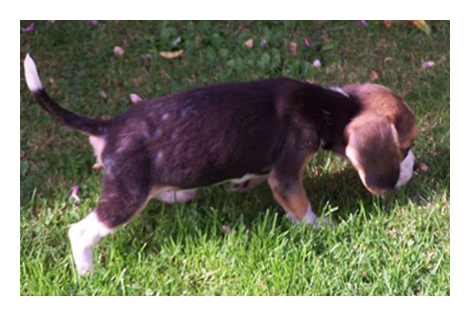 After the adoption process was finalised, we went to pick up Delilah from MTAR.

She was much smaller than we thought, with little bald patches all over her (right).

But little Delilah had a lot of strength! And soon her mischievous and confident personality started to shine through.

Our family friends loved her so much that they too decided to adopt from MTAR - a beagle called Missy, and the two became fast friends.

Due to Delilah’s rocky start, she has never grown into a full-sized beagle.

She's nine now, and going a little grey, but people still stop us to ask about our ‘puppy’! But her small size doesn’t stop Delilah from living life to the full. Her favourite things about home are food, cuddles on the sofa and long walks.

Like many rescue dogs, having other dogs around to show her the ropes really helped Delilah to develop her confidence.

She has grown into a loving, truly unique character, with lots of fun little quirks. She is a little mischievous at times (as beagles usually are!), and we will often find her snuggled up completely underneath a blanket, or she may have snuck under the duvet at the end of someone’s bed! She’s very vocal, and if you ask her a question, she’ll reply with a little grunt noise. 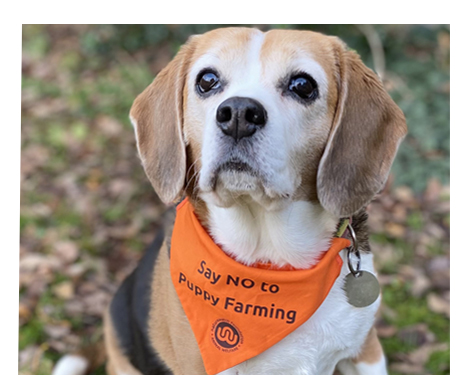 Nowadays, apart from chilling out at home, exploring the countryside, and eating lots of tasty food, you’ll find Delilah campaigning about something she’s truly passionate about - ending puppy farming (right).

Puppy farming is a cruel trade, causing so much suffering and pain for the dogs involved.

Delilah would be counted as one of the lucky ones, escaping from the puppy farm she was brought up in early.

However, even she didn’t escape unscathed.

We suspect that the malnutrition she suffered from in the crucial early stages of her development has meant that she’s never grown to her full size.

Due to bad breeding, she has also had congenital cataracts since birth, and never got to spend her first eight weeks bonding with her mum and siblings.

Giving a rescue dog the second chance they deserve

Our advice to anyone thinking about getting a dog is that if you’re ready for the commitment that a dog brings, give a rescue dog a chance! 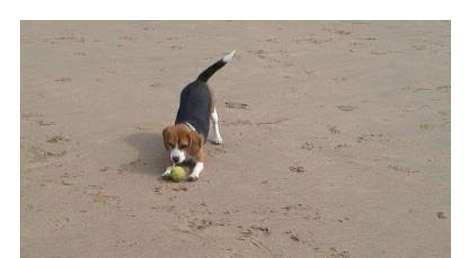 It is the most rewarding experience watching a dog come out of their shell and blossom into an amazing addition to your family; especially seeing the bonds that they form with the people you love.

Contrary to what some people think, rescue dogs come to centres for rehoming through no fault of their own, and they are truly grateful to have been offered a second chance.

The truth is that any dog requires work and patience, whether they come from a rescue centre or otherwise.

But introducing your rescue dog to things we take for granted, like a garden of their own to run around in, the beach, or having their own bed for the first time, are truly magical moments.

There can be challenges too - they might be nervous at first about trying new things, meeting new people and other dogs, or being on their own, but you probably would be too, if you’d been through what they had!

The key is patience, gentle, rewarding encouragement, and above all, commitment. They have already been through so much, so you need to make sure that you’re ready to be their forever.

Our rescue dogs have truly been some of the most special souls and we feel truly lucky to have them in our family. We cannot imagine our lives without them.

If you make sure that you are ready, adopting a rescue dog will be the best decision you ever make!

Find out more about puppy farming in the UK

Could YOU offer a safe and loving home to dog or puppy in need? Check out Many Tears Animal Rescue, based in South Wales

ORDER A BANDANA - 'Say NO to Puppy Farming'