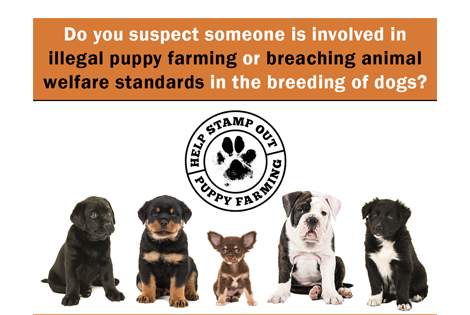 Thousands of puppies are born on horrendous puppy farms here in the UK. Hidden from the public, often locked in cold and draughty sheds, breeding dogs are exploited for quick profit.

The puppies themselves often have very little human contact. Many of the pups carry hidden disease and are removed from their mothers too early, leading to high vet bills and behavioural issues, unforeseen by their new owners. As for the unsold puppies and exhausted breeding dogs, we may never learn the full scale of the brutality.

We are asking members of the public to tell our Animal Crime Manager about anyone they suspect is either involved in illegal puppy farming or breaching animal welfare standards in the breeding of dogs. Our Animal Crime Manager can be contacted, in strictest confidence, at andrew@naturewatch.org or 07392 185 373.

Our undercover investigations into illegal badger persecution have not only uncovered information on badger baiting, snaring, poisoning and sett interference, but also other forms of serious crime, including illegal firearms, possession and sale of drugs, dog fighting and fox hunting. They also exposed the sale of puppies abroad to be trained for badger baiting. We are confident that extending our resources to investigating the illegal puppy trade will prove equally successful.

Following reports of named individuals engaged in suspected illegal puppy farming, additional covert investigations will be undertaken. We will provide high-quality information packs to law enforcement agencies resulting in the rescue of the animals, prosecution and supporting the demise of the puppy farming sector. Our team has extensive experience of working with law enforcement agencies on animal-related crime. For security reasons, the identity of some team members is confidential.

The UK government is also strongly committed to stamping out puppy farming and has recently announced legislation to ban third-party commercial sales of puppies and kittens – a main route to market for puppy farmers. These measures have received support from all political parties. The government has also introduced tougher licensing regulations for dog breeding. Sadly, some criminals and those only interested in making quick money at the expense of animals, will continue to flout the new laws, often using the internet to advertise their puppies. By launching a ‘Hotline4Puppies’, Naturewatch Foundation hope to complement the work of other animal welfare campaigners, the updated dog breeding regulations and support the work of law enforcement agencies stamping out cruel puppy farming. Sadly, despite the thousands of dogs languishing in UK animal shelters, many more thousands of puppies are also smuggled into the UK, mostly from Eastern Europe, to feed the demand for ‘man’s best friend’ especially at peak purchase times like Christmas.

How to find a licensed puppy breeder, not a puppy farmer

If the deal or price is too good to be true walk away and report your concerns. If you buy a puppy from an illegal puppy farm another dog will soon take its place.

Getting a puppy is a big decision and it’s important to do lots of research about the type of dog you want and the long term financial implications. You may wish to consider adopting a dog. After all, there are thousands of dogs waiting in animal shelters in the UK.

Want to report suspected puppy farming? Our Animal Crime Manager can be contacted, in strictest confidence, at andrew@naturewatch.org or 07392 185 373.