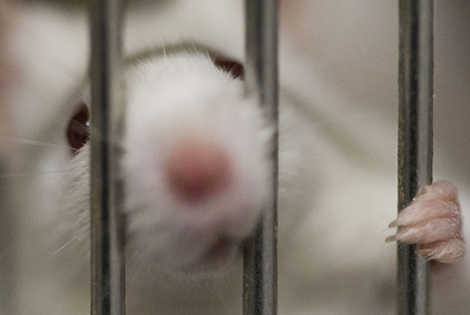 New animal testing facility at The University of Hyderabad, India

At the beginning of September, The University of Hyderabad, India, announced the establishment of a new animal testing facility which is one of the largest in India housing up to 12,000 animals!

It's hugely disappointing that Hyderabad University has ignored the trend to move away from outdated animal testing. Surely, a place of learning should be leading the way with groundbreaking human-centric science and other in-vitro techniques.

This sad news prompted our World Animal Day Ambassador in India, Chinny Krishna to write an open letter. Chinny is also a  former member of the Government of India's Committee for the Purpose of Control and Supervision of Experiments on Animals (1996-2002; 2006-2015)

One has to question whether there is any link with Isoquimen of Spain who has a very large cat and dog breeding facility in Hyderabad?

This is with reference to the Article in yesterday's Business Line regarding the new "animal facility" at the University of Hyderabad.

This is a most retrograde step. 63 years ago, in 1956, Professor Medawar, a Nobel Prize-winning biologist,  got two young researchers to look into the use of animals in experimentation.

After three years, in 1959,  William  Russell and Rex Burch ublished their  Principles of Humane Experimental Technique in which they classified humane techniques under the headings of replacement, reduction, and refinement--now commonly known as the three Rs. In many ways, this elegant classification was 25 years ahead of its time in most parts of the world.

It is a pity that 60 years after Russel & Burch published their findings and based on which most countries have started to move away from animal testing to in-vitro techniques, the University of Hyderabad puts up a new animal facility.

Toxicological approaches, technology and knowledge have made great strides in the past twenty to thirty years.   The regulatory systems remain largely frozen in the 1960-70s (the post thalidomide phase), but toxicological science is poised for tremendous breakthroughs in technology, understanding and risk assessment potential (as indicated by NAS 2007 report, the EPA’s Toxcast, the EPA/NTP/NIH MoU, the NIH/FDA MoU, the EU/COLIPA project, the ILSI Risk-21 project, etc).

On a technical and scientific perspective, a ground breaking analysis  was carried out  for the first time on close to 2300 safety tested drugs , by Dr. Jarrod Bailey, in the UK, on the subject of analysis of the use of dogs in predicting human  toxicology and  on the relevance of using dogs in drug testing as the main non rodent species. It has been generally assumed that testing new pharmaceuticals on dogs help ensure human safety and efficacy. However to date, the human relevance and predictive nature of using these animals has not been addressed, even though its known that an estimated 94% of the drugs that pass preclinical tests in animals fail in human clinical trials and up to half of those which do pass, are later withdrawn or relabelled because of the adverse effects, not predicted in animal tests. This peer-reviewed study, is most comprehensive published analysis to date of the value of dogs for predicting drug toxicity in human and is based on the largest database of animal toxicity studies completed. The conclusions were drawn from 2300 drugs, for which 3200 comparisons were made of effects in dogs and humans, using “likelihood ratios”, to determine the evident weight provided by dog data to the probability that a new drug may be toxic in humans. The scientific analysis showed that using dogs in new experiments to predict toxic responses in humans is no more than pure chance.

The findings revealed for e.g. if a new drug has (based on prior information) a 70 % chance of not being toxic in humans, then a negative test in dogs will only increase this probability to just 72%. The dog test, therefore provides essentially no additional confidence in the outcome for humans, but at a great ethical and financial cost. The authors conclude that the ‘preclinical testing of pharmaceuticals in dogs cannot currently be justified on scientific or ethical grounds.

There are so many alternates available to replace animals in experiments and research and it is beyond my understanding how the University of Hyderabad has wasted so much of its resources on this.

I would be more than happy to answer any queries you may have.