Our Animal Crime Manager talks about his work 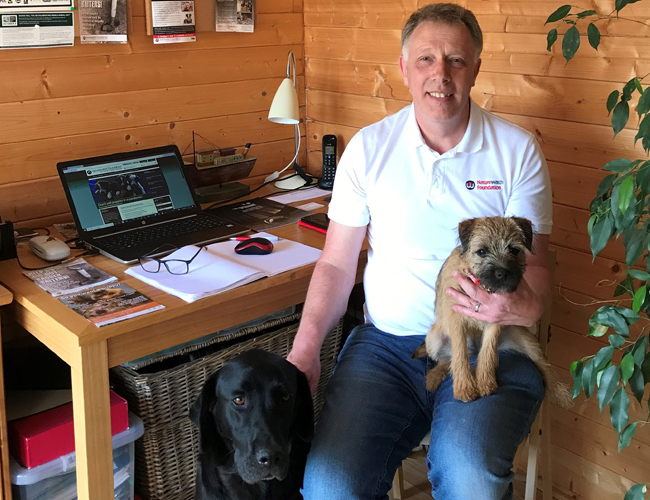 As the Animal Crime Manager for Naturewatch Foundation, my role involves managing our UK Badger Baiting Campaign, and also our investigations capacity involving badger baiting and puppy farming, so life is never dull!

Naturewatch Foundation’s Badger Baiting Campaign aims to bring an end to badger baiting, sett digging, illegal lamping, killing and other acts of cruelty towards badgers involving the use of dogs.

Badgers have always been a favourite wild animal of mine, and the amount of cruelty and pain inflicted upon these animals in the name of sport or crime is truly shocking. The dogs involved can also suffer, sustaining terrible injuries and, like the badger, ultimately sometimes suffer death while under the care and control of their owners who show so little remorse for their actions and often take such pleasure in it.

As an animal lover, I fail to understand their mentality and, of course, there has been a long calling of a connection between those who engage in animal abuse and violence towards partners and children.

As Secretariat of the UK Badger Persecution Priority Delivery Group since 2016, part of my role has been to collate incidents gathered from partner agencies on a monthly basis for annual analysis. It is always a sobering moment when doing so, acting as a stern reminder of why it is has been a UK Wildlife crime priority for over ten years.

We are meeting our campaign aims by the following initiatives:

Asking people to contact me in confidence if they suspect someone is involved in illegal puppy farming or breaching animal welfare standards in the breeding of dogs.

Naturewatch Foundation aims to bring an end to puppy farming, where breeding dogs are kept in cruel conditions and where puppies are bred purely for profit.

Again our aims are also being met by:

Continuing to talk about puppy farming, I have to say that despite a thirty-year career in the Police service, which included time as a wildlife crime officer, and since retirement a career within the animal charity sector on investigations and intelligence, I was new to the world of puppy farming in June last year when we extended the investigations into this area. What I have seen and heard since then has really shocked me - an industry which entails a world of misery, illness, cruelty, death, fraud, crime, despair, upset, profit, shame, and guilt.

Information received from people in confidence is investigated and developed for the purpose of working with partner agencies to either increase the intelligence portfolio or instigate further investigation and ultimately enforcement action. Behind the scenes, our Open Research Animal Crime Investigator works tirelessly, producing some excellent work and results which I disseminate accordingly, acting as the single point of contact with everyone.

Our work since 2018 with illegal badger persecution has seen over 125 information reports being received, to date, which has seen partnership work with various police forces, the RSPCA, the SSPCA and the National Wildlife Crime Unit. Ultimately, at the sharp end this has revealed criminal associations across Europe, involvement within organised crime groups and, importantly, enforcement action with multi-agency operations whereby severely injured dogs were recovered and various investigations or prosecutions are pending.

Since June 2019 to date, puppy farming has nearly reached 400 information reports which really highlights the magnitude of the problem and, although the legislation known as “Lucy Law” was introduced in England recently, there is still so much work to be done by all partners.

Information received has led to multiple animal welfare referrals and research products being disseminated to the RSPCA, SSPCA and, predominantly, to local authority licensing teams who have the statutory responsibility to license dog breeders and take enforcement action. Many of the reports have revealed unlicensed breeders who are now undertaking licence applications, or who are under investigation or facing potential prosecution.

Future considerations could possibly be a call for a National Database of Licensed Breeders with a National, multi-agency taskforce to licence and investigate this industry.

With the COVID-19 crisis affecting us all, it has had an impact on my work as well. I routinely work from home in any case and had a world of just a Labrador for company. Like many, I am now juggling space and peace with another dog, two teenagers and my wife all at home. Certainly challenging and a complete change, yet also nice to see everyone safe and well.

Workwise, whilst friends in some of the other animal charities have been furloughed, we continue to work normal hours although the entire Naturewatch Foundation Team are now home-based across the UK. Microsoft Teams has certainly come into its own!

Travel to various quarterly meetings of aforementioned groups are now on hold, and attendance at conferences, rural crime days or presentations likewise.

However, reports continue to come into our investigations hotline or via email and, as lockdown continues, there has recently been a rise in the number of reports linked to puppy farming. This is due to a desire by people to get an animal for company and also due to a number of scams by criminals trying to elicit money or personal details by offering puppies delivered by couriers which in fact don’t exist.

We are currently running a COVID-19 campaign.

So, in reality, much of my work has not changed so far. If you have any information on named individuals who you suspect might be involved in badger baiting or puppy farming, please do contact me in confidence on 07392 185373 or by email andrew@naturewatch.org

In the meantime, I hope we all stay safe and remain well through these unprecedented times

With best wishes to you all
Andy Swinburne
Animal Crime Manager

UPDATE: After almost five years working tirelessly with us to end badger crime and puppy farming, Andy has chosen to retire. His diligence and commitment to his work was outstanding and he is greatly missed.