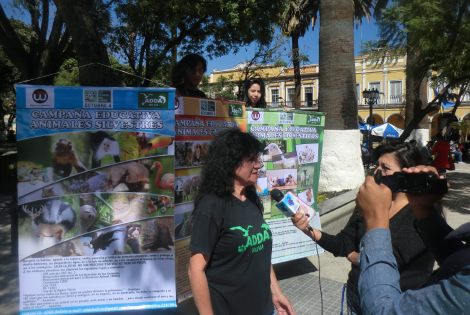 Sewing Seeds of Compassion in Bolivia

It is with great joy that we provide a summary of the launch of ADDA Bolivia's 2018 Educational Campaign.

The launch was a huge success which drew a great deal of media attention. The event was attended by many people, including children, all of whom expressed great interest in our messsage of compassion towards animals. The children asked the names of the animals and some kissed the banners.

Educational pamphlets were distributed to the press and to everyone who attended - young and old.

We are delighted to inform you that the Department of Zoonoses, which deals with controlling animal diseases, has now joined our Campaign, and an operational branch of the Police (POFOMA) has also proposed their support. POFOMA is responsible for the rescue of both domestic and wild animals in captivity.

It's proving to be a very successful educational activity which has attracted many people. We are also being asked to go to neighborhoods, schools, colleges (secondary schools) and to cover most of the population.

ADDA Bolivia is grateful to Naturewatch Foundation for funding the 2017 World Animal Day grant which has helped support this project.

View photographs of the launch of ADDA Bolivia's 2018 Educational Campaign