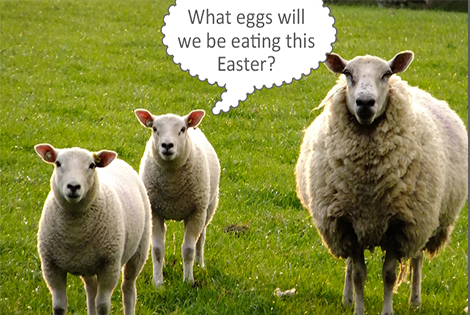 What eggs are you expecting this Easter?

There is a deeply disturbing environmental concern of commercial puppy breeding that not many people know about - the spreading of vast amounts of dog faeces by breeders to agricultural land.

In doing so they could pollute our countryside and water courses, potentially damaging the ecosystem and spreading disease to our wildlife. Waste spread to grazing land could also pose a significant biosecurity risk to our food chain.

Wales is known as the puppy farming hub of the UK and many of these licensed commercial breeders operate from their working dairy or sheep farms.  According to local authorities and public complaints, it is common practice for dog faeces, used-bedding and carcases to be mixed with farm waste and spread to land. Burning and burying waste is also common practice by licensed breeders, yet also deemed unsafe by Natural Resources Wales.

In just one Welsh county alone, up to 65% of licensed breeding establishments are disposing of dog waste unsafely! Here are just a few of the examples we’ve uncovered:

A total of 2542 adult dogs - not to mention all the puppies they’ve produced - reside on licensed breeding establishments that use unsafe waste disposal methods in two well-known Welsh counties.  This equates to tonnes of dog faeces, which is being disposed of in ways that can pollute our countryside and spread disease to both animals and humans.

Jennie Rudd, Campaign Director for Naturewatch Foundation says: “Shockingly, local authorities in Wales are well aware of these practices and know they are inconsistent with environmental and health guidelines issued by Natural Resources Wales, yet continue to grant dog breeding licences regardless.”

The National Farmers Union claims: “Dog poo can spread disease to farm animals. Bag it and bin it wherever you are.”  Yet, farmers themselves are spreading industrial quantities of dog faeces on their land, making a mockery of the NFU’s appeal.

Marc Abraham, better known as Marc The Vet and founder of puppy farming awareness campaign PupAid, states: “Dog faeces is not only capable of spreading diseases Neosporosis and Sarcocystosis to innocent farm animals, but also contains E. coli and Salmonella, together with a possible array of common life-threatening parasites including hookworm, tapeworm, and roundworm.  Even after faeces is washed away by rain, parasitic eggs often remain, potentially infecting anything - or anyone - that comes into contact; namely people, wildlife, farm animals, and our beloved pets.”

The spreading of dog waste to land has been going on unchecked in Wales for decades and it’s impossible to quantify the damage already done to the ecosystem.

The Welsh puppy breeding industry isn’t just a huge welfare concern for breeding dogs and their puppies, it is also an environmental issue that necessitates urgent attention by local authorities and Natural Resources Wales.

Jennie Rudd added: “Clearly, this is an issue that needs to be addressed as a matter of urgency in Wales. However, we are concerned that it has the potential to impact on other areas such as Welsh tourism and exports. After all, produce from Wales reaches every part of the UK and beyond.

This is why we are urging members of the public to write to their Members of Parliament/Assembly Members to tell them this situation is completely unacceptable on every level and that action must be taken immediately. Puppy farming is a deeply concerning issue for everyone now, regardless of whether they are dog lovers or not.”