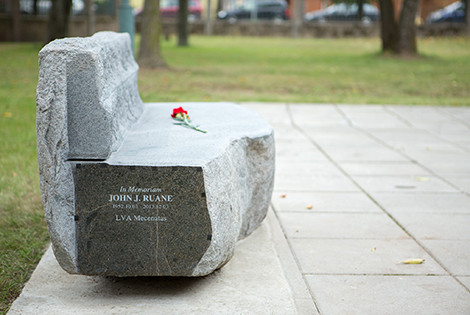 Commemoration Of Achievements In Lithuania

On Friday 2nd October, a memorial bench for the Founder of Naturewatch Foundation, Mr John Ruane, was unveiled on the campus of the Veterinary Academy in Kaunas in recognition of all the help and support that was provided by the organisation to improve the lives of Lithuania’s animals.

Led by John Ruane, Naturewatch Foundation, began working in Lithuania in 1993, the year the Red Army finally pulled out.  During the difficult period of emergence after the Lithuanian Republic declared independence from the Soviet Union, we assisted the Lithuanian Society for the Protection of Animals (LiSPA) re-establish itself as the country’s leading authority on animal welfare issues.

Highlights of the work carried out by Naturewatch Foundation, led by John Ruane, were remembered with a selection of photos via a slideshow and this was followed by a blessing of the bench.

Media articles covering this event can be found at the links below:

Mr John Ruane, Founder of Naturewatch Foundation, passed away in December 2013 but his legacy lives on through our work to end animal cruelty.  Link to obituary notice

Background to the work of Naturewatch Foundation in Lithuania

In those bleak, early days the Lithuanian society was dormant and terrible hardship was endured by the country’s animals.  At that time there were no veterinary supplies of any description, no animal protection laws and only a fledgling national animal welfare society.  We were able to assist by supplying new veterinary equipment, medicines for the animals and funded staffing and operations, including help with offices and a field rehabilitation unit.

Lithuania has a reputation for being particularly forward-thinking in matters of animal welfare which was very helpful to the Society when it started working on resolving animal welfare issues.  Over the years, we developed an excellent working relationship with the State Veterinary Service and Ministry of Environment which helped enormously in making progress for the animals.

Until the end of 2010, our work in Lithuania was led by our full-time representative, Dr. Ben Noreikis, a Lithuanian American who had previously worked for the Humane Society.  Naturewatch Foundation seconded Dr Noreikis to assist Lithuania’s national society commence pioneering animal welfare activities.

More information about our work can be found here