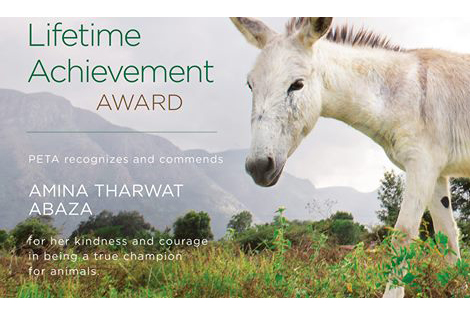 Amina Abaza has received a ‘Lifetime Achievement Award’ from Peta for her dedication to promoting animal protection and improving the lives of Egypt’s animals.

Amina is the founder and president of the Society for the Protection of Animal Rights in Egypt (SPARE) and has been a World Animal Day Ambassador since 2008. The global celebration of World Animal Day is proudly coordinated by Naturewatch Foundation.

It’s wonderful that Amina’s work has been officially recognised but, like most genuine animal advocates, the only thing that really matters to her is making life better for animals.

In her acceptance speech, Amina encouraged modern Egyptian society to emulate the ancient Egyptians in their respectful, and kind, treatment of animals. The high regard for animals shown by the Pharaohs is demonstrated in several ways, most notably the discovery of ancient animal tombs and the great care of them during burial.

SPARE campaigns for Egyptian lawmakers to include animal welfare in the Egyptian constitution, is calling for an end to the live import of sheep from Australia into Egypt, works with media and government officials in Jordan to raise awareness of PETA's investigation revealing the systemic abuse of donkeys in Petra, campaigns for companion animals to be spayed or neutered, and operates a veterinary clinic and a mobile clinic.