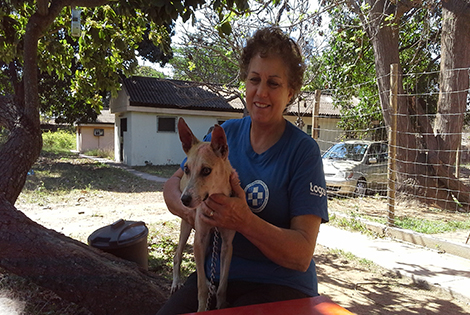 We are delighted to announce that another country in Africa now has a World Animal Day Ambassador!  Moira Felgate, President and Founder of the Mozambique Animal Protection Society (MAPS) will be raising awareness and encouraging participation in World Animal Day each year.

Moira founded MAPS in 2008 and at that time it was the only registered animal welfare NGO in Mozambique.  MAPS has its work cut out as there is no animal welfare legislation in Mozambique and very little understanding of animals and their needs.  The stray dog populations are on the increase, rabies is endemic and a growing problem.

As we will soon be launching a new World Animal Day website, more information about Moira and her oranisation’s animal welfare work will be included on the new site.  In the meantime, if you wish to contact Moira please send an email to: general.maps@gmail.com or moira.brian@intra.co.mz.  Moira can also be contacted by telephone: 00 258 84 343 5450