​More than ever badgers need protecting. They are facing the most brutal and unjust persecution from criminals and government, and we are relying on your generosity to help us stop this.  Make a donation today to help end badger baiting.

Badger baiting involves torturing badgers until death and is a thriving ‘blood-sport’ across the UK.  Both the badgers and dogs suffer inconceivably painful injuries.

Small terrier-type dogs are sent down setts to locate badgers and hold them at bay whilst baiters dig down.  Once exposed, the badgers are dragged from their setts and either baited there and then by a pack of savagely-trained dogs, or they are sold to underground baiting rings, earning someone in excess of £500.

Lamping for badgers is another favoured pastime, with perpetrators choosing to stalk foraging badgers late at night before unleashing their dogs in terrifying and gruesome combat.

One way or another, the badgers always die.  In addition to their horrific injuries from being viciously attacked by dogs, they are also often deliberately wounded by the baiters in order to guarantee a longer fight by breaking their jaw, teeth or even a foot.

If the dogs survive, rather than receiving veterinary treatment for their open gashes, ripped ears and lips, and any other unimaginable injuries, they are stitched up by their owners without pain relief or anaesthetic; or they are killed.

Some shocking statistics on badger crime

The chart below shows the number of badger-related incidents and intelligence reported to the UK Badger Persecution Priority Delivery Group (BPPDG) in 2019.  Reports were sent by animal welfare groups and law enforcement agencies. 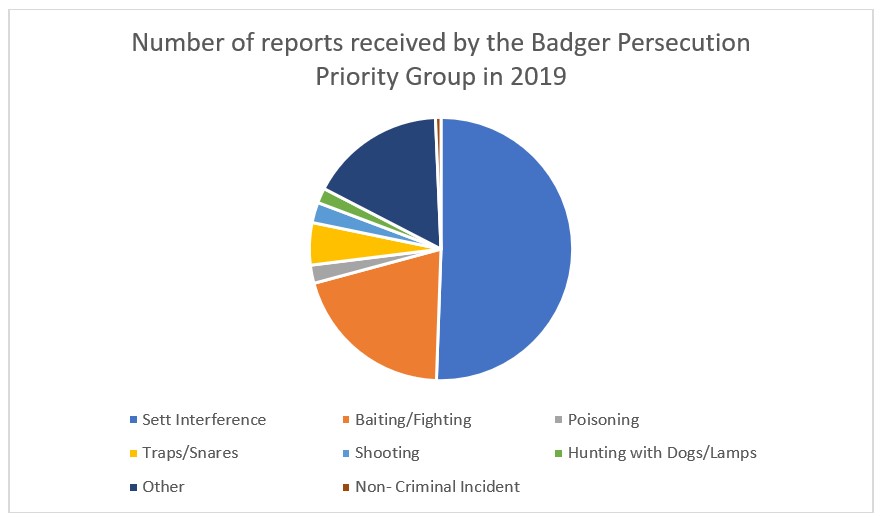 In relation to sett interference, the top four were:

This represents a decrease of 11.4%, which is believed to be due to a change in IT software by a contributor and a decrease in data provided rather than a decrease in crime, and shows a 19.2% decrease from 2017.

Again, sett interference and baiting/fighting remained the top areas of illegal persecution in 2019 as in previous years of 2016-2018.

After being illegal since 1835, it is time to put an end to this thriving 'sport' and see badger baiters are put behind bars

As members of Wildlife and Countryside Link, we have contributed to the Wildlife Crime Reports that have been published for the past four years: 2016, 2017, 2018, and 2019.

In the absence of consistent data from the government on wildlife crime, the reports publish data received by wildlife and conservation NGOs of crimes against wild animals and birds. The aim is to highlight wildlife crime in England and Wales, and the conservation impact it has.