We couldn’t provide our vital services without the generosity of people like you. Help us continue our work to bring an end to puppy farming – make a donation to our end puppy farming campaign.

Puppy Farming in the UK

We are a nation devoted to our canine friends. However, some people take advantage of our love of dogs by exploiting them for financial gain. Millions of pounds of often untaxed revenue are generated from puppy farming.

Tiny puppies are even illegally smuggled into the UK for onward sale. However, the great news is that significant efforts are in train to stamp out puppy farming! There are also many ways you can help.

Naturewatch Foundation has urged the government to deliver effective puppy farming public information campaigns to accompany the changes in dog breeding and selling laws. Too many people just don’t know about puppy farming and are easily conned by experienced puppy peddlers. It is vitally important that the ban of third party sales of puppies and kittens is also introduced in the Welsh and Scottish Parliaments.

Sadly, criminals and those ignorant of dog breeding laws and animal welfare will continue to exploit dogs and the dog-loving public and ignore even the new laws.  Just take a look on social media selling sites and see how many puppy sellers don’t have a licence! With a little research, puppy farmers are very evident – with multiple litters for sale. Other sellers are more deceitful with fake identities and even throwaway mobile phones!

The terrible numbers show that up to 400,000 farmed puppies are sold to the British public every year. All have been exposed to disease in the breeding sheds. None have known love and care in a family home. As for the unsold puppies and exhausted breeding dogs, we may never learn the full scale of the brutality.

Thanks to YOUR support and campaigners across the country, the UK government has finally listened and is taking real action to improve the lives of so many innocent dogs and cats.

Puppy farmers will no longer be able to hide behind unscrupulous dealers and the fake cover of pet shops. It’s a fantastic step in the right direction!

However, cruel breeders will STILL find ways around the law to boost their profits.

The demand for puppies is huge. It has been reported that puppy smuggling gangs can make up to £35,000 per week from illegally transporting puppies to be sold to unsuspecting families in the UK. These criminals feed off current marketing crazes for designer dogs with no consideration of the welfare of the puppy or their parents. 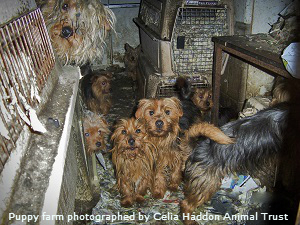 Please donate whatever you can and help us end the intensive farming of dogs.  Your kind donation will help us stop the cruelty and exploitation of battery bred dogs and their puppies.

How the puppy farming industry operates in the UK today.

Harry’s story: from puppy farm to a loving home

How to spot a puppy farmer