Naturewatch Foundation is delighted to announce the winners of the 2019 World Animal Day grant.

As expected, a high number of applications were received resulting in many weeks of scrutiny by our voluntary team of independent advisers and trustees of Naturewatch Foundation. Several excellent projects met the criteria and grant guidelines but, sadly, not all could be winners.

Congratulations to Morris Darbo, World Animal Day Ambassador, and his team at the Liberia Animal Welfare & Conservation Society (LAWCS) who have won the main grant.

Liberia is a poor, post-war country on the west African coast, with many problems including the recent Ebola crisis that killed over 4,000 people. The violent civil war, from which the country is still recovering, has left many scars and LAWCS is committed to helping to create a caring and socially responsible environment where animals and people live together in harmony.

Many of Liberia’s animals suffer unimaginable abuse. They are regarded as a commodity regardless of whether an endangered species, farm animal, cat or dog and their wellbeing is rarely considered.  Children grow up seeing their parents abuse animals and imitate them.  LAWCS seeks to break that cycle by teaching children to respect animals and care for them responsibly.

The country has no laws that protect farm and companion animals and, although a law to protect wildlife exists it’s not enforced and few people know about it.

Since the year 2000, the organisation has focused on animal welfare education in schools, communities and via radio programmes. LAWCS also provides free healthcare and treatment for animals in need and celebrates World Animal Day every year.

The LAWCS team works tirelessly advocating for better conditions for animals in Liberia. Students flock to join the Animal Kindness Club in their school (if there is one) where they learn to take care of animals and the environment. The children become ambassadors in their families, schools and communities and re-educate their parents. Little by little, a new understanding of the human-animal relationship is trickling upwards to older generations.

The Humane Education Programme run by LAWCS in schools has proven to be very successful which is one of the main reasons the organisation was chosen to receive the major grant this year. The World Animal Day grant will enable the programme to be extended into new districts and expanded upon to include community engagement. 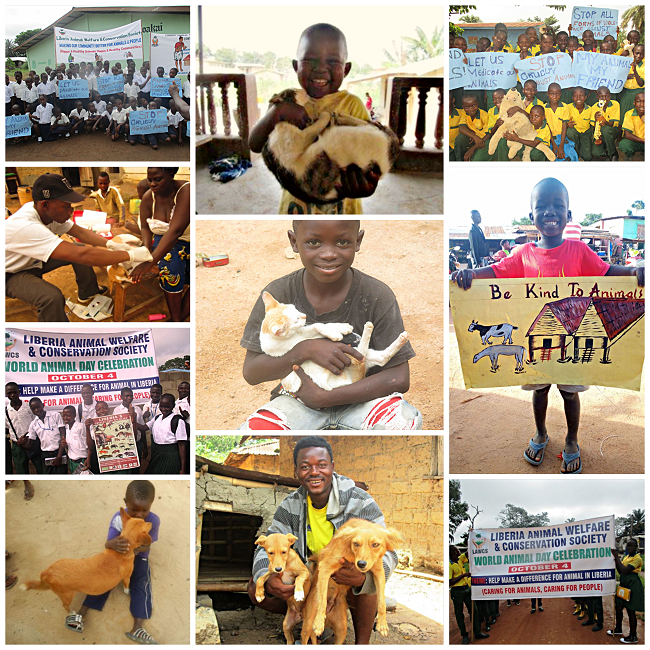 A 10-month project will be implemented in 20 communities within two new districts of Lofa County.

LAWCS will collaborate with stakeholders to train local leaders on the existing wildlife protection law; disseminate robust animal/wildlife protection messages; and build relationships with other conservation groups. Once local leaders have been educated about legislation and the importance of protecting wildlife, they will pass this information down to the people in their community.

By working with stakeholders, communities will be educated about legislation protecting the country’s wildlife and encouraged to start valuing wild animals and respect the law. It is hoped that increased awareness of the existing law on wildlife protection will help bring about a reduction in the bush meat and wildlife pet trades. Communities will also serve as protectors of the area which will help reduce habitat destruction.

After the project is over, LAWCS will continue to work closely with the local leaders by visiting the communities twice monthly to ensure that groups remain functional in their protection and care of animals and the environment.

LAWCS has a good working relationship with two radio stations who will engage with this project by holding educational talk shows and panel discussions, as well as regularly airing informative jingles.

Humane Education Programme in Schools - LAWCS will work with children aged 5 to 16 years in 20 schools for eight months within the new communities and establish Animal Kindness Clubs in each school.  At each school in the programme, LAWCS will train a designated volunteer teacher to teach humane education lessons to all classes in the school. The organisation will provide ongoing mentoring to the teachers.

World Animal Day event - LAWCS will celebrate World Animal Day, as it has done for many years, using it as an ideal opportunity to create more publicity about the plight of Liberia’s animals.